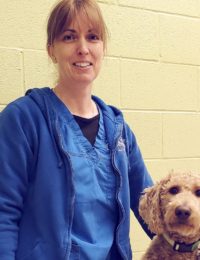 Jennifer grew up in Stouffville and has always had a love for animals. She was first introduced to the Stouffville Veterinary Clinic as a high school co-op student in 1993 after which she joined the team full time. She now lives a little north of Stouffville with her husband, two kids, her dog Jefferson (seen in image), a bearded dragon named spike and a couple of fish. In her spare time she enjoys folk art and being outdoors, but most of all loves spending time with her family.