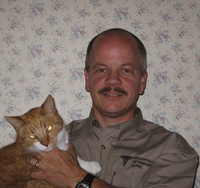 Dr. Paul Westermann, owner of the Stouffville Veterinary clinic grew up on a farm just south of Stouffville, growing up on a farm sparked his love of animals. Paul went to elementary school in Unionville and graduated from St. Robert’s High-school in Thornhill. Paul went directly from high-school to University of Guelph where he obtained the degree, Doctor of Veterinary Medicine from the Ontario Veterinary College in 1988. Dr. Paul Westermann spent his first year after graduating university working in Stayner doing both large and small animal medicine, he then decided to come back down closer to family and started practicing at the Stouffville Veterinary Clinic and has been here since 1989. Shortly afterwards Paul married his wife Cora, who works at the clinic doing accounting. Together they have raised three sons, to which Paul happily devotes most of his non-working hours. In his spare time Paul enjoys playing hockey, mountain biking, skiing and just relaxing at home with his family, which includes two dogs, a Hungarian Vizsla ‘Ruby’ who is fourteen years old, a two year old Terrier ‘Daisy’, a four year old cat named ‘Dusty’, as well as a tank full of fish!